IHI Shows the challenges of shipbuilding to space equipment business

IHI (formerly Ishikawajima-Harima Heavy Industries) is one of the industrial enterprises representing Japan. The company is proud of 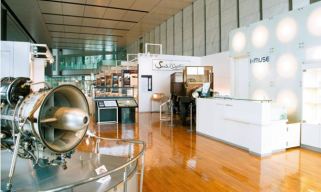 150 year history since its establishment in 1876, and it holds a large share in the shipbuilding, heavy machinery, social and industrial infrastructure, and other areas in Japan now. This IHI established the technology museum, called “i-Muse “ at the IHI head office in Toyosu, Tokyo in 2006. The
purposed was to show the company history and its achievements of technology.

The various records and products are exhibited there from the original shipbuilding work to the current IHI’s engineering business. It seems to show, in a sense, the total feature of the development pattern of heavy industry in Japan and the current technology challenges as well.  So the museum is a valuable archive to convey the feature of heavy industry and engineering technology of Japan as a whole.
Recently, I visit this “i-Muse” in the head office at Toyosu. This is the visit record at that time.

The origin of IHI is “Ishikawajima shipbuilding” （石川島造船）made by the Edo Shogunate in 1853. But it became a yard controlled by Japan 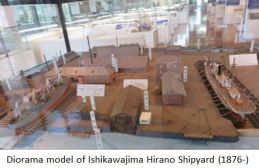 Navy after the Meiji era, and bought up later by the Tomiji Hirano（平野富二） in 1876 as a private company “Hirano Shipyard”（平野造船所）. Based on this foundation, the company “Ishikawajima shipyard” （石川島造船所）was established by him in 1889, and after that, the company began rapidly advancing into various businesses, like power generation facilities, railroad locomotives, automobile and other filed. It is said that in this process the IHI has successfully consolidated the business base leading to the present status.

Meanwhile, after the war in 1945, the company continued further expansion of its business as a technology company of heavy industry and engineering venture successfully. Then IHI has gradually grown to the company internationally known in the field of social infrastructure, aircraft engines, large ships, tankers and bridges, and it merged with Hiroshima’s “Harima

Shipbuilding” （播磨造船）in 1960. The name was changed to the “Ishikawajima Harima Heavy Industries” （石川島播磨重工業）at that time, and in 2007 the company name was simplified to the current IHI taking its initial.

Then the long development of busness, the IHI has moved its head office to Toyosu, and set up the museum of “i-Muse” commemorated its 150 year in its office. The purpose was to introduce what sort of technology the company has developed and how has it engaged in the field by the exhibition of the products manufactured by the company.

This “IHI Monozukuri” i-Muse ” was facilitated at the large lobby, and it designed to be seen from the outside covered by the glass specification. The inside space was divided into several corners. Each corner displayed the various records and products categorized by certain theme in chronological style, such as documents of IHI company history, engineering projects worked out, in addition to the model and real products of machinery, ship, building, bridge structures and so on.

First of all, as entering the entrance hall, the real size “Jet engine J3”, which has 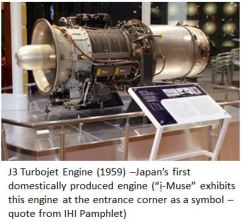 produced by IHI in 1959, attracted our eyes. This indicates that IHI is now strongly committed to the technology development in the space and aviation field.

Also, as we proceed to the “Corporate History Corner”, the business advancement of IHI is exhibited by many photos, materials and detailed chronology. As I mentioned earlier, the exhibition extendedly displays

that the process of buying up the shipyard in the Ishikawajima area, and starting the ‘Ishikawajima Hirano Shipyard’, in addition to the subsequent IHI business expansion in chronological chart.

The history of ‘Harima Shipbuilding’ (founded in 1907) which merged with IHI in 1960 is also exhibited there too. Through these exhibits we could roughly observe the process that IHI has been evolved its business from the simple shipbuilding into the

various new fields, such as airplane and automobile as well as bridge and building construction sector.

Besides, the diorama model of “Hirano Shipyard” was elaborately installed at the center table there, so we could easily caught the image of the initial shipyard figure at that period of time.

— Construction of Tokyo Station, which led Japan to modernization

Showa period, was introduced by various media, like photos, records, models and so on. By this exhibition, we could overview the IHI’s company development process which started from the original shipbuilding works and expanded their business to the multidisciplinary sectors like heavy machinery, rail road, and bridge building, and others.

There could find the memorial pictures of the Japan’s first steamship “Kaiun Maru”
（海運丸1877) and warship “Chokai” (鳥海1888), and photos the construction scene of s “Azumabashi” bridge (吾妻橋1887) of Sumidagawa river, and so on. With seeing these exhibits we could be acknowledged how the company

has advanced the technology and broaden business in the field of heavy mechanical industries.      In addition, a large construction model of the Tokyo Station building which was the epoch making engineering works in 1900s, was installed in the center part. It looked boasting the IHI’s important role in such big project by its architecture technology. Also in this corner a model of “Taiho-maru “ (大鵬丸built in 1906) was displayed as a symbolic shipbuilding project.

The main theme of this corner was the role of IHI in the Japan’s post-war high economic growth period of Japan. During this time, how to secure industrial energy 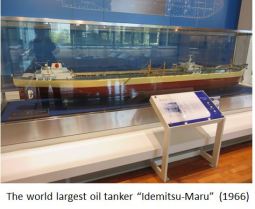 sources was a major issue in Japanese society.  The IHI has responded to the needs by constructing the “world class largest tanker construction” as its challenging projects with the accumulated shipbuilding technology since Meiji. The exhibition displayed a large scale model of the 200,000-ton tanker “Idemitsu Maru” (出光丸) which was built in 1966 to show its excellence of
technology.

There found the many exhibitions of photo and illustration panels on a yearly basis making it easy to understand the IHI’s technical development.

Also, the development model of a mobile large crane “Jib climbing crane” (1968) which is essential for the construction of high-rise buildings (for example, Kasumigaseki Bldg) was displayed there. This exhibit indicated the company has been engaging subsequently in the technology of the infrastructure project afterward.

The main theme of exhibition in this period was to show the overseas business expansion of IHI and strengthening technological power towards energy and environmental fields. Major exhibits were the construction of large storage
LNG gas tanks (1969-) and the LPG plants (1984-)

.
At the exhibition hall, a model of LNG storage tank  that stores an extremely low temperature of minus 162 degrees was proudly placed there with the elaborate commentary to the internal  structure. It might be suggesting that IHI have born a major role in this field. It also introduced that these type of LNG

plants were deployed globally not only in Japan but also overseas.

In the aviation sector, the FJR 710 flight test model (1977), a model of liquid hydrogen H-I rocket (1986) can be observed. The Brazil’s shipboard pulp plant (1978) and Turkey “Golden Horn Bridge” (1974) and other global engineering projects were also introduced there.

social infrastructure, development of state-of-the-art industrial equipment, and starting to the full-scale commitment to the aerospace field.
One of the symbolic projects featured in the exhibition was the installation of the “Akashi Kaikyo Bridge” (明石海峡大橋1994) project. The construction was a huge suspension bridge of 3.9 km in length across the strait including the technical challenge of overcoming the gushing wind pressure and extreme 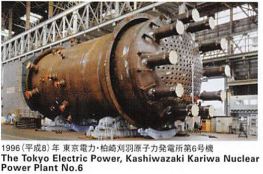 length of the bridge span. It was very interesting to see there the experiment process of measuring the strength of suspension bridge and the cubic model of the suspension beam of the bridge.

In the corner there were also found the model of a new LNG carrier “Polar Eagle”, TEPCO Kashiwazaki nuclear power plant generator (柏崎原発1996), shield robot digging underground tunnel (1997) and others.    In the aerospace division, the development of “V 2500 engine” (1991), entry into “H – II rocket turbo pump” were introduced there too.

— Developing the jet engines that fly the world’s skies

In this section, the development projects which are currently engaged by IHI were

introduced. In particular, the exhibition is suggesting that they are focusing on the technology development of jet engines. The development process of IHI’s challenge since  the air turbo engine “FJR 710” (1971) were introduced there. And the exhibition showed the participation project concerning to the international joint development projects in the upfront area of aviation, such as recent aircraft technology, advanced engine development which is believed being led to the space development. 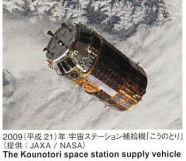 displayed as examples. The participation to the project of refueling space station “Konotori” (こうのとり2009), the development of the new transportation system “Yurikamome” (ゆりかもめ 1996), etc. are also shown as the examples of the engineering activities in the social infrastructure.

the real components of the “Collection capsule” of the asteroid discovery aircraft “Hayabusa” （はやぶさ) which successfully hit the Earth returned in 2003. The rocket capsules must have been suffered by ultra-

high temperature when entering earth atmosphere from space at the time f return. It is said that IHI utilized its insulation technology which has cultivated in the LNG projects to respond this severe condition.      The exhibit that shows the contents of this capsule disassembled was profoundly dramatic. It thought us that the accumulation of technology is going to be utilized in various places in development.

♣  After the finishing the tour to IHI

Although it was only a one hour visit, I could learn a lot

about the fact that the IHI has been advancing its business as a
technological pioneer in the various field for long time, like heavy industry machinery, aviation, engineering business, and so on following the long time axis. IHI believed to be a leading company now in the field of heavy industry in the abreast of the Mitsubishi Heavy Industries. So through this exhibition, we’ll see how Japan’s heavy industries have been advanced their technology and get to the present day development.

Besides, many “Japanese industrial heritage” products and equipment has included in the exhibition too. It was also interesting to find the historical fact that the IHI had just started its small ship-making business for the first time by purchasing government assets and actively absorbing Western technology in the Meiji era, and gradually expanded its development area and technology in responding the social industrial needs of the times, and becoming a big engineering company.

In this sense, this “Monodukuri i-Muse” is a historic mirror of industrial technology

development and gracefully shows the figure of “corporate technology” archive.  Even though it describes only on the activity of a certain company, but it could fully suggest the engineering business development of Japan as a whole with rich in stories when glimpse Japanese industrial development.       In addition, it is an attractive exhibition style too that it adopts the display style with the categorized theme tackled by the company responding to the social requirement of the times of development stage.

In the meantime, there’s the “Ishikawajima Museum” that introduces IHI’s “Ishikawajima shipbuilding” history and the relationship with the local people in the present Tokyo-Tsukuda area. It is attractive institution to be familiar with the state of initial time of IHI factory and the impact to the regional community and people. It is believed to be worth visiting beside the IHI i-Muse ” itself.