Visit the “Kurofune” and the “Kaikoku” Museum in Shimoda, Izu

While visiting Nirayama Iron Furnace (NRF), I visited the port city Shimoda on its way back to Tokyo. Shimoda is the place where Japan 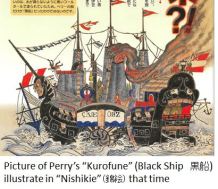 signed the treaty on the formal opening of port trade to Western countries such as Hakodate, Yokohama, and Kobe, and permitted Europeans to live inland  Japan for the first time. So the Shimoda became the first place having the direct cross-cultural contact with Japanese local community.

Then, in the city we could find many facilities showing this historical event and it’s

influence, such as the “Kurobune Museum” in the premises of “Ryosenji” temple, where was the place to implement U.S. and Japan’s negotiations on the Shomoda Treaty, and the Shimoda “Kaikoku Museum” (opening port memorial 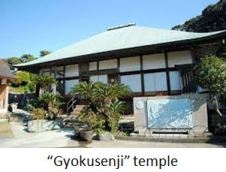 museum). And at the coastal hillside of Shimoda town, located a historically spot like the “Gyokusenji” temple where the first Consul General  Harris had been staying.

These facilities have been showing interesting materials around the end of the Edo period, like

Japanese lifestyle observed by American eyes, records of negotiating records, and pictures on the activities of American people among Japanese local communities, and so on. They looked well reflected of the social change of Japan when moving towards the Meiji. So, I could enjoy visiting these places on my tour to the South Ize after the visit NRF..

The following is my small record at that time of visit. 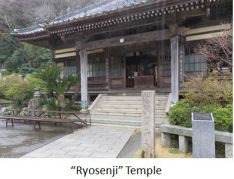 This “Kurobune Museum” was set up in the

premises of the “Ryosenji” temple where the diplomatic negotiations were carried out associated with the “Japan-U.S. Treaty of Peace”. This consultation was performed between Admiral Perry and the Shogun’s high ranking offers in 1854 on the theme how to implement the opening policy under the Edo’s long time isolation policy. The temple’s premises is currently designated as important

historical sites of Japan, and many travelers have been
visiting there. We could see there a large numbers of photographic pictures on the scene of negotiations between the US and Japan in the building.

In the adjacent to the temple area, the “Kurofune Museum” is located, The museum

is displaying abundant historic collections, like portraits of Admiral Perry, photographs and pictures of the US

black steam-ship Kurofune, depictions of Japanese society at the period, and the “Nishikies” (Japanese colored woodprint) which shows the living conditions of foreigners, and so on.

Especially, the portraits of Admiral Perry’s drawn by the Japanese artist was

interesting which looked to mirror the imagination of
local people to the Westerners at the time of Edo. Besides these materials, a bunch of rare items such as armors and guns, daily living goods, musical instruments were also lining up there.

Among them, I was attracted to the miniature
paintings that are depicting the scene of diplomatic

consultations of the Japan-US, the maps showing world
and Japan’s geographic conditions at the time, the appearance of Japanese people seen by foreigners.
In addition, “Black Ship Theater”, which interprets the historical background at that time, was also interesting. I felt it was a valuable museum to make us noticing the pre-modern history of Japan particularly on its diplomatic relation.

This “Kaikokku”museum is a precious historical museum

with showing the Shimoda port history at the end of Edo period, as well as the cross-cultural impact
brought by the local community’s first contact with the Western people at that time. It is also known as a seldom public museum managed by a volunteer citizen in the Shimoda city.

The museum holds abundant collection of pictures and documents, and other

historical goods, such as the records when Admiral Perry had come visit to Shimoda, memorabilia of “Kurofune” (Black Ship), anecdotes on the diplomatic activities of

American first Consul General Harris and the interpreter Hesuken, the stories of Yoshida Shoin (a prominent opinion leader and educator of Rangaku in the Edo period) who had tried to stowaway off the Shimoda bay in breaking the rule of Edo government and finally died in the prison, and other precious materials. There found a

record of pioneer photographer Shimooka Renjo’s too who had first brought in the camera technology in Japan.

Among them, the most eye-catching exhibit would be the records of Russian navy general Putjatin’s visit to the Shimoda area, in which the records quoted that his ship had wrecked and towed to the Toda bay near

Shimoda, and several anecdotes were talked there regarding the social relationship with local people who helped the Russian people to fix the wrecked ship, and it led the friendship agreement between Russia and Japan in 1855.

In the collection, the records have revealed the Edo government’s embarrassment

with facing the frequent roaming and harboring of Western

naval vassals near the Japanese coasts. And the exhibitions were showing various inside stories associated with the diplomatic consultation in Shimoda. They also vividly display how big magnitude were brought to the local communities in the pictures when the people suddenly saw many foreigners appeared around them by the opening the port.

The museum stated that there were thousands of materials in the museum, but only around 1,000 of them are exhibited regularly, though the special theme-oriented exhibitions were held from time to time.

The “Gyokusenji” temple is the residential place where the Consulate

General Harris had been staying for three years while negotiating on the
Shimoda US-Japan treaty. In the year 1927, the “Harris Memorial Stone” and the “Memorial Hall” were build there, but they have been ignored the meaning for many years. But the US President Carter has visited the memorial hall in 1979, and then began to gather attention of many people. 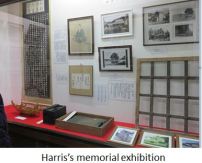 Inside space is not so big, but it contains a lot of photographs, maps, documents related to Consul General

Harris. So we can glimpse of the scene of Japan-US
diplomatic relations at the time in the Memorial Hall. It must be a valuable memorial hall in knowing the background of Japan’s Edo period and the dawn of Meiji era.

There had been built tombs of soldier of the Perry fleet. But

anyway it was surprising that there were a “monument of the milk” and “memorial stone of slaughtering cattle”  in the premises. According the prescription of these monuments, they were was built because of the “Gyokusenji” Buddhist

temple that was the first place trading the cow’s milk products in the market, and slaughtering cattle for eating against Buddhist tradition in Japan. And it is said that the Shimoda region was the founding place of Morinaga Milk Industry. So we could feel well from the monuments that the absorption of Western culture and life style had been rapidly permeated in this port city, and the society itself began to change fast even in dietary life in the early Meiji Period. 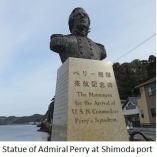 There is a small park on the west bank of Shimoda Port, where “Perry Visit  Monument” was built looking like inspecting over 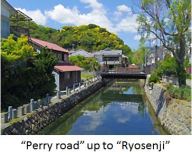 the whole port. The inscription of monument says that Perry ‘s fleet troops arrived in this area and negotiated the Shimoda Treaty. From this monument site, it is said Perry’s troops went up the river road, marched towards “Ryosenji” temple, and started the historical consultation regarding the Japan-US diplomatic relations. Currently, this road
is protected as a “Historic Street” and it becomes a

place to attract many tourists reminding the dawn

In this way, Shimoda became the first opening port in Japan, as a fully contacting place of Westerners and Japanese people. And people there received various multi-culture impacts. Then we might have to be appreciated Shimoda as a historical site showing peculiar phenomena of rapidly changing society at the end of Tokugawa period. I could feel of that in this time of visit Shimoda

♣   After visit the Izu history tour to NRF and related places

Heritage Site, I visited the “Egawa Tei” of Egawa Hidetasu, and Shimoda where was the arrival place of the Perry fleet which actually urged the Edo government to start construction of the NRF.

Through these series of visit, I understood well the obsession of Japan which wanted to absorb Western contemporary technology in hurry due to the threat from Western 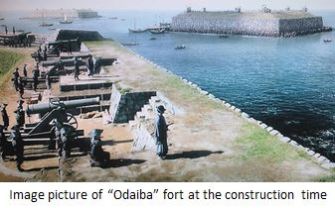 powers at the end of the Tokugawa period, and the necessity of proceeding political strategy, and also the social change

brought by the discard the isolation policy in the past. In addition, through this visit trip I was impressed that the movement toward modernization of society after the Meiji period had already started in the end of the Edo period, and rapidly accelerated by the accumulated experiences in the society as a whole. 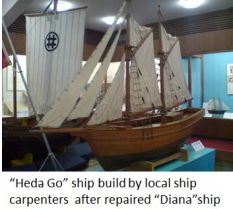 Even in the steel making after Meiji, the engineers had burnished their technology through constructing
modern furnaces in the various places, and the shipbuilders in Toda port near the Shimoda, who had initiated the repairing work of wrecked Russian ship and built proxy ship of it, were actually contributing to the construction of large-scale Western ships afterward.

I finished my trip with realizing again that these challenges and efforts later formed the roots of modernization of society and technology which started in the Meiji period.