Visit the Nature and Science Museum of Tuat, Tokyo

Posted on September 3, 2019 by kunioigusa

University of Agriculture and Technology, Tuat) in Koganei city, Tokyo in the early August. The Museum  is very proud of long history being able to back to 1880s  as it had started as a Silkworm Testing Institute under Meiji government.  And afterward the facility was transformed to the present Museum in 1997 under the university of Tuat which was founded as the Agricultural Academy in Meiji

period.   Under this background, the Museum has been ardently worked on collecting  historical textile objects long time since the Meiji period, and tried to exhibit them to the public, including weaving machines, sericulture facilities, worm seed samples, various textile equipment, and now added a number of exhibits related to the recent chemical fiber

technology products as well.  It would be an excellent facility for the people who have interested in the textile industries, particularly regarding silk industry.   The background  was the recognition that  the silk and silk products have been one of Japan’s most important export products and been playing a significant role in modernizing Japanese industry.

♣  Outline of the exhibition seen in the museum

The  Museum holds several exhibition rooms to display significant textile products and their machines, particularly on the silk related materials.     For the example among them, the “Textile Exhibition Room”

and the “Measurement room” exhibits, many machines and tools related to the silk industries, including silk specimens, its tools, production machines, and measuring instruments which are especially related to cocoon growth management, silk thread generation, spinning process, silk product production and quality control, etc. All exhibits are visually indicating the development of the silk industry.

In “Textile Machines”, you can list the textile machines starting with traditional looms and consequently developed to machines present day.  In addition, the “Nishiki-e” corner is a fascinating exhibition that is describing a visual record of how important sericulture thread was during the Edo and Meiji periods. 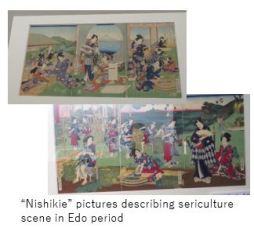 On the other hand, the “Academic History Exhibition Room” and “Award Room” show how the university has been advancing its educational and research activities since the Meiji, with focusing agriculture and textile science. It is worth seeing in honor of Professor Akira Endo, who played a very important role in medical science. The museum also

displays functional robots in the museum lobby in order to show its modern engineering activities. Here,  I’ll try to look back the history of the Japanese silk and silk industry along with the exhibits at each exhibition corner.

♣   Development of sericulture in the exhibition

The museum seems to try to introduce whole features of the development of Japanese sericulture industries, include silk thread and silk industries with using various specimens and samples.

It’s widely known that sericulture and silk producing industry had a long history.      In that process, silkworms have been deliberately fostered and produced to various type of raw silks  and yarns. It is believed that the silk technology  was introduced to Japan from China

during ancient Yayoi period in the thousand years ago.  Since then, , silk products had long been appreciated as high-quality textiles among for celebrities in Japan, but in the Edo period, they became quite popular clothes and traded well among Edo city’s population.  For this reason, the sericulture and silk industry were strongly promoted and became produced in various places.  In particular, after the Meiji era, silk thread exports were upgraded to the  powerful means to earn foreign

currency. As a result, they have grown as one of the Japan’s core industries aftermath.  In addition, the technology associating with silk industries was marked significant advancement since the government had vigorously established many silk research and testing center. These situation at that time can be observed that in the exhibition, like the improvement of cocoon quality, the nurturing of silkworm, the improvement of the quality of yarn, the efficiency of spinning, etc.

The museum explains technical changes in the sericulture and its works at the former period in detail.  When it comes to the sericulture process, first, the hatched silkworms are moved to the silkworm-baskets “Sanza” and given mulberry leaves to feed for starting

breeding process, called “Hakitate“.  The matured worms are then transferred to the tools “Mabushi” being made of rice straw and led them generate silk cocoons.  In the exhibition, various “Sanza” and “Mabushi ” samples are exhibited. Especially, special instruments such as “Rotating Mabushi” are

displayed there. It is showing how the technological advances were embodied in the equipment since the Meiji Era. There found many rare goods too,

such as the structural models of silkworm and sample of pathogenic objects, and so on to show the scientific analysis on the silk industries.
After all, this exhibition shows how greatly the people were making point of developing sericulture technology at that time. 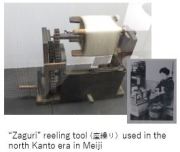 After generation of cocoon, the spinning process will start to convert it to silk thread (raw silk yarn). It is widely known that a major technological change in “threading” has occurred in the tools and machinery during the Meiji to Showa era. This

evolution can be observed in the exhibition. In other words, the exhibits is showing technical advancement on the equipment, such as go forward from the traditional “spinning” tools, to “reeling machines (Suwa type)”, then “multi-spinning reels”, and “automatic reeling machine”, etc.
In this development, we can see the diffusion of silk producing technology among general people in

the scene, exemplified by the activities of “Tomioka Silk Mill”, one of the Japan’s World Industrial Heritage site) which was given a great influence to silk industrial development of Japan.
In addition, the museum tries to highlight the technological shift from the traditional ways to the modern ones through showing

the real sample and models of silk, such as various pattern of silkworm specimens, graded specimens, trademarks of silk products, and measuring instruments formerly used, and describing how silk thread and silk production was technologically managed at that time. (You can check the details in the photos and their commentary)

<From raw silk to silk fabric>

In the meantime, the process of weaving silk thread has significantly advanced since the Meiji period. (This was already touched in the description of previous “Toyota Industrial Memorial Museum -Textile Hall”.)  These

processes could be defined well in the exhibition of the Tuat’s Museum.  The museum has an extensive collection of ancient reeling tools across the world, traditional Japanese reeling tools, many types of looms, etc.  The display of the unique “knit” tool equipment is also an interesting exhibition.  These tools have been still operated by the museum staff, and the actual technology changes can be traced through the moving machines.

♣     Development of Japanese Sericulture and silk industry in Nishiki-e picture

As you have seen earlier, silk production had been carried out since the 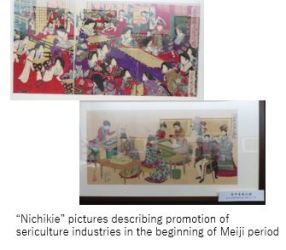 ancient days, but it became more popular since the Edo period, and after the Meiji it has upgraded to a  prime industry thanks to the government promotion measures, named “Shokusan-kougyo industry” policy. You can see a lot of them at the “Nishiki-e Painting Room” in the museum.  At the room, there can find many features of the engagement of Edo people working on the

sericulture, and various textbooks and specimens subjected to the sericulture techniques.  Also, several “Nishiki-e” pictures are depicting the promotion policy of sericulture and situation of silk production in the early Meiji period. One of the interesting items would be the exhibition of 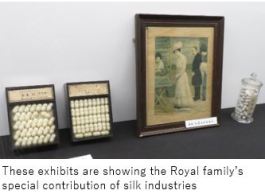 “Trademarks” symbolizing the status of silk merchandise transactions.
These are all valuable exhibits that are indicating the depth of concerns and spread of public interest in the sericulture and silk industries of each period.  Furthermore, the exhibition shows special relationship between the silk industry and the imperial family, like seen in the memorial pictures and treasures.

♣   Approach to modern textile science in the exhibition

products, but there are many other objects in association with the textile industries.  For example, there are various exhibits related to the chemical fibers such as rayon and nylon and other recent advanced fiber materials, such as carbon fibers. And several examples, like fiber’s chemical 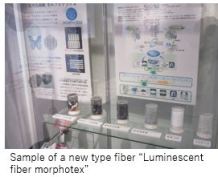 applications to the medical field are also exhibited there. The old and new sewing machines is also interesting exhibition too. The other exhibition room like “Awarding Room” introduces the great contribution of Prof. Akira Endo to the field of biochemistry who invented the material “Statins” controlling cholesterol. 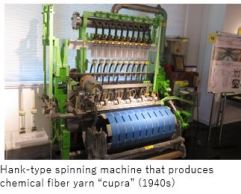 of the textile industry.  I could have obtain some knowledge on what’s all about of sericulture and silk industry, how precious industry in Japan, what technical features it had, and what evolution has achieved in the process of modernizing the Meiji industry. I’m really amazed the abundance of collections and exhibitions on the silk industries when walking around the museum, and actually felt the 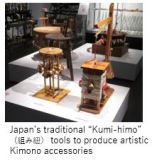 museum’s outstanding contribution of historical analysis on the textile industry in Japan.
Furthermore, I got a fresh impression too about the museum’s effort to try to open broadly the social community by organizing public lectures, science classes, and publishing and other activities as new museum attempts.