.  The purpose of Establishment of the park is to restore and display valuable historic building and facilities in the compound.. Last year I had  a chance to visit this Park while traveling around Nagoya.

The buildings exhibited there were all brought in from various locations of Japan, and reconstructed them in the park with keeping original style as it was. So they  visualize how Japan  diligently learned the Western architecture  and how fast developed its technology since Meiji period. This writing is my observation of Meiji Village at this time of visit.

The “Meiji-mura Village” is located at the spacious hill site in the outskirts of Inuyama City.  There hundreds of historical buildings, public facilities and monuments are constructed to keep historical heritage as they were, such as legendary hotels,

In the Meiji era, a number of marvelous buildings and facilities were built as the symbol of social modernization. However,

unfortunately the most  were under the threat of going lost because of successive earthquakes, war damages and other natural disasters, particularly, by the vigorous construction booms in the economic development and social change.

In the meantime, after the passing time a century since Meiji, the

reservation movements emerged for these historic constructions, and this “Meiji village” was established in 1965 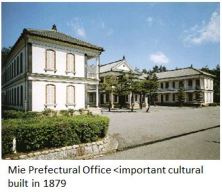 by the great initiatives by Taniguchi Yoshiro (famous architect) and Tagawa Motohiro of Nagoya Railway chairman. Since the establishment, many celebrities and intellectuals have contributed and supported the development of the Park as a whole. As the result, the Village Park now become famous as a public facility received nationwide supports including the tourism organizations and local people. 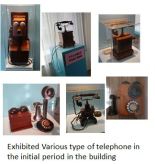 The significance of the park is  not only showing appearance of the historic buildings, but displays valuable utilities in the historic buildings, like machines, pictures and documents, and other goods to be recorded the life style and social conditions in the Meiji period. So, people will be charmed by the exhibition of figures of buildings, but they could appreciate historical goods and facilities inside them. Actually many of the buildings and facilities are nominated as cultural treasuries of the country.  We can list many examples like in the following lists.

< Some examples of Meiji-mura’s Historical Buildings > 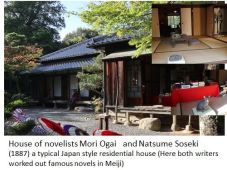 Besides buildings, as the special exhibition, we can spot several treasury collections like “Meiji Emperor’s Special Coach” No.6, (as a railway monument), Kyoto City’s electric streetcar (1895),

All of them are describing  the diligent people’s initiatives to promote the modernization of architectures, civil engineering, transport and communication facilities of early time of Japan.

Among them, the particularly important would be the “Shimbashi Railway Repair Workshop of  Japan Railway ” (“Machine Hall Museum”), because it clearly portrayed the first situation of railway operation and its development process regarding mechanic industries at that time.

The buildings and facilities there are all fascinating  and important, but the “Machine Hall” Shimbashi Factory of JR was particularly attractive among them, because the Hall exhibits various industrial machine tools practically   used in the Industrial Rising Period of Meiji.

In a way, the Machine Hall is positioned as a valuable railway heritage as it was constructed in 1872 at the moment of railways starting in Japan. In addition, the Hall exhibits a number of old machines which had been used in the industrialization of Meiji period. So the exhibits seem to indicate how Japan has been developing machinery industries and advancing the industrial revolution in Meiji. 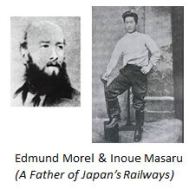 Anyway, when the railway run first in Meiji, the railway technology was completely lacking in Japan. Then, all the railway related materials and machine tools were directly imported from the UK as well as technology, 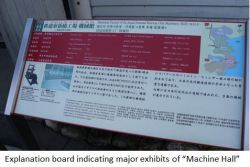 and the facilities were produced by foreign engineers. However, Japan had steadily learned its engineering technology in the consequent year of Meiji. The materials exhibited in the Hall would

be good evidence how Japan’s domestic technological skills had been formed in the Meiji era.
Such as power machinery, various machine tools, textile machinery etc. displayed there. They were all real things to be able trace the course of Japanese <industrial development, including railway.

For example, the following machines and facilities are exhibited in the Hall;

“Steam hammer” (1881) produced and imported from Vulcan Iron Works (1881), “Horizontal single cylinder steam engine” (so called Brunat Engine, imported in the early Meiji era from France) which was used as a prime mover at the Tomioka spinning mill, “Prime steam engine for fog signal light” used at the Niwayama lighthouse in Otaru City, Hokkaido (1897) which manufactured by Yokohama Seisakusho, “Special

(manufactured by Kokuto Machinery Mfg, (1912), “Mule spinning machine for wool” (made in England) which had significantly helped the establishment of early Japanese spinning industry, “Ring spinning mill” (made in USA), Wooden handmade “Gara-Bo spinning machine” that performed the spinning with a water wheel (invented by Japanese technician and inventor of Gaun Tatsushi, in the early Meiji era), “Francis turbine generator” (made in US, 1913) used at the hydroelectric power plant of Kami-tatsumi, Kanazawa, and many others are found there.

Looking at these machines, we could recognize the situation that Meiji people had to fully depend on the imported machines for the first time, as seen in the power

generators, steam engines and others. But under this condition they’ve learned energetically its manufacturing techniques from foreign engineers to master them. Because Japan were completely lacked the technology of industrial power machine and metalworking that time. But Japan quickly emulated the ideas effectively and successfully began to produce the sophisticated machinery in the successive years.

For example, in the spinning industry, Japan started emulating  technology of the imported Mule and Ling systems from Europe in the first stage, and gradually mastered the skills

of spinning, cotton drawing process, and tackled the roving 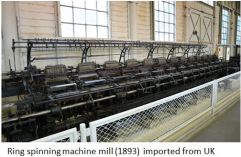 spinning machines, and finally shifted to the using of domestic textile machines.
These processes are well observable in the exhibition. The good example of them would be the domestically produced spinning and weaving machines which have developed by  the Japanese engineers, like the Toyoda-style automatic weaving machines (This machine wasn’t displayed in the Hall unfortunately though). 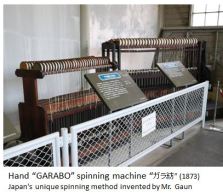 Among many exhibits related to the textile industry, the most interesting example is a unique spinning machine named  “Gara-Bo”, which was inexpensive and easy to use machine applied the Japanese traditional wooden technology.

Looking at these machines and tools exhibited, we can recognize how quickly and widely the textile producing technologies were developed and spread across the country in the industrial regions, even in the rural areas.

Actually this was my second visit to this “Meiji village”. If compared with this visit in 1994, the Park was looked the facilities have increased in number, and improved the contents and quality of exhibition as a theme park.

clearly  pictures of the Meiji people’s efforts which  grappled with modernization of society and tried to advance the skills by attentive assimilation of the western technology, and  promoted further Japan’s own technology from the scratch.
In this meaning, this “Meiji village” is a valuable park that makes us feel the weighs of historical process, not simply for the nostalgic memory.  I really felt I’d like to visit the Park again and want to examine the exhibition there. .