Posted on February 5, 2020 by kunioigusa

— Amazing subway network in Metropolitan Tokyo and its development

day that is almost the same with the population of Tokyo. And the routes count over 13 lines with more than 130 stations. This might be noted for unprecedented scale in the world.  The subway now became an indispensable commuting means and crucial public transportation for the people in Tokyo area. How these scales of subway network has been created and formed in history?  With

this question, I visited Tokyo Metro’s “Subway Museum” in Tokyo this month.
The museum is located just adjacent place to Kasai Station on the Tozai Subway Line.  The museum which was founded in 1994 to introduce the development history of subway system in Japan, especially in Tokyo region. Now there now many real trains and railway equipment are exhibited aiming to publicize the activities of subway 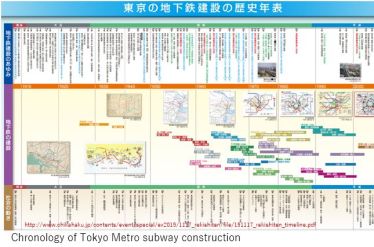 network of past and present.  For example, the technology advancement of railway vehicle and drive systems, excavation technology in the underground construction work, and railway running operation and management.  In the exhibition, real vehicles, moving devices, interactive models and various diorama are abundantly used.  New subway operation and equipment methods, as well as previous history on the subway can be learned through the direct observation there.  The following is a rough introduction to the museum and development process subway network in Tokyo.

♣    The history of the subway that started in Tokyo

The plan of Subway construction in Tokyo was started in 1910s.  It was said to begin as Tokutsugu Hayakawa, a businessman, realized the need to

provide of subway system in Tokyo as an essential urban transport after observing London’s highly developed subway system. Afterward, he established “Tokyo Light Subway Co.” in 1917 to move forward the beginning subway construction with his initiative under this thought.  The plan had to inevitably face uncountable severe problems like financial and technology difficulties at the time of beginning. However, the construction itself could has been completed as the original plan after his tireless

endeavor. It was the first subway line constructed in Tokyo of operating in the route of 2.2km between Asakusa and Ueno in December 1927.  Later, it was extended to Kanda and Ginza, and then to Shimbashi in 1939.  This is the origin of the current Ginza Line. The real subway vehicle of being first operated in Tokyo is on display in the museum as a precious memorial asset, which is now designated as a “Japan’s

Modernization Technology Heritage”.     The second subway in Tokyo was the Marunouchi Line, but the completion of it had to wait till the post-War period. This line was opened in 1954 between Ikebukuro and Ochanomizu of 6.4 km and eventually reached 27.4 km to Ogikubo station later.  These two lines became the most convenient transport and

popular means for urban people in Tokyo until the 1960s in paralleled with the other ground railway networks. The museum exhibits the real vehicles of Ginza and Marunouchi lines side by side as memorial objects.

Rapid economic growth in 1960s has vigorously promoted the movement of further expansion and improvements of subway network in Tokyo in order to respond strong demand for convenient urban transport, particularly in the wake of the Tokyo Olympics in 1964.  The two operation bodies, “Eidan Subway Network” (now Tokyo Metro) and Tokyo Govt’s “Toei Subway Network” have been responsible for this requirement at that time.

First, Eidan Subway Network constructed the following lines, such as the Hidaniya Line in 1961 (between Minamisenju and Okachimachi, later extended Kitasenju and Nakameguro), the Tozai Line in 1964 (originally Takadanobaba and Kudanshita, later between Nakano and Nishifunabashi), and the Chiyoda Line in 1969 (Initially Kitasenju-Otemachi, later Ayase-Yoyogi-Uehara), 1974 Yurakucho Line (between Ikebukuro and Ginza, later Wako-shi and 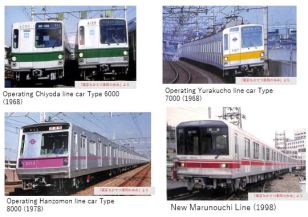 other ground lines (mutual entry line management) and facilitation of innovative vehicles in new designs and devices. They have also initiated further expansion of operation of railway lines.     From the 1990s inward, the subway network was more expanded with opening new routes between the Namboku Line (opened between Komagome and Akabane in 1991) and the Fukutoshin Line between Ikebukuro and Shibuya in 2008.

At present, the Tokyo subway lines have reached a total length of 304 km and has 13 and 130 lines with marking the largest scale in the world.  It would be amazing achievement that such bountiful subways lines 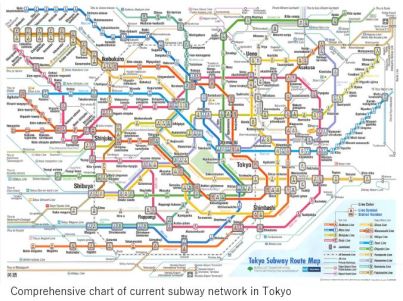 have been constructed during 90 years since the first subway was born in Tokyo. In addition, it has gained a great reputation that each of the lines work precisely in tandem and operates accurately in the designated time schedule. At the museum hall, a bronze statue of a pioneer Hayakawa is placed in commemoration and beside it a panel board describing history of development since the first challenge is on display there

♣   Evolution and transition of subway cars seen in the exhibition

In the museum, several representative subway vehicles are displayed in real figures or by models.  The type of subway vehicles being operated in Tokyo was usually classified by digit numbers to identify

(Automatic stop). It is significant in terms of design and facility even it was the first challenging product of subway in Tokyo.
Next to it, the second Marunouchi line, 300 series 301 is also seen in the display. We can see the appearance of the vehicle being precisely the same figure at the time of

opening.       In addition, the other 1938 Ginza Line 100 (No. 129) vehicle is provided at different corner to invite visitors to inspect the inside appearance, driving structure, pantograph movement, and control unit by their own eyes.     The exhibit also shows the evolution of the structure and function of vehicles among the different types of cars used to work in the previous subway lines. According to the explanation, the carrying equipment was changing from the original bogie type to the steering bogies, the material was shifting from stainless steel to aluminum alloy, the driving method was also advanced from WN

coupling type to the direct drive motor, the control device was transformed to the electromagnetic chopper and VVVF converter, in addition, the current collecting method was also shifted to advanced pantographs. All these processes can be acknowledged in the technology information chart displayed in the exhibition hall with photographs and pictures. The recent development trend in linear motor was also introduced in the explanation board there.

♣   Underground excavation and its technology seen in the exhibition

The most essential technology in subway construction would be how successfully build underground tunnels in the safe and efficient manner. 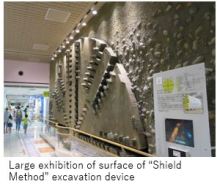 The advancement of drilling methods and technologies are shown in detail in the exhibits. The excavation method is usually classified into two types. One is “opening ground method”’ which excavates and constructs tunnel from the surface of the ground. The other type is the “shield underground method” which constructs underground tunnel by special drill

machines like ship-worms move. The opening excavation method is relatively low cost, but it is difficult when there are structures on the surface.  On the other hand, the shield method is less constrained by the ground and soil conditions despite technically difficult and expensive.
In urban area, the deep excavation measures like shield method are essential because buildings are densely constructed, and many underground structures are busily intersected.

The shield method is that special machines

consecutively excavate tunnel by soil crashing cutters while the “shield (or box)” supporting the tunnel’s wall in the rear side already drilled , and the cutter machine sequentially is advancing the hole in the tunnel, and then move forward the shield and finally builds the final wall behind the shield.  In the present day, highly mechanized shield machines are used, and the walls are constituted of divided blocks (“segments”) to form structures.

In the museum, the state of the general excavation method and the shield method ones are reproduced by the scale model, and the huge surface of the shield machines which actually used is displayed there. For the example, the shape of rotating cutter head at the tip of machine, the fine blade (cutter bit) and roller cutter attached to the machine, the mechanics to carry the excavated earth and sand backward, the cylindrical block on the

dug wall, and others, as well as details of the forming process of segment structure.  These shield method technologies have greatly advanced recent days with facilitating GPS functions, sensors, drilling rigs and others. The technology development like it has made a great leap forward the construction of congested subway networks construction as a result. These are clearly observed in the exhibition.

It would be common belief that the precise operation and control system are indispensable element to successfully keep accurate on-time operation and safety of the railways.
Japan’s railway management is highly reputed as the most advanced.  In the case of subways in Tokyo, it is crucial to perform careful management regarding daily 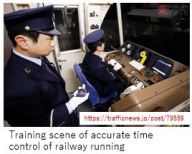 train schedules, accurate monitoring operation and troubleshooting, when considering that millions of passengers get on and off every minute using dozens of various lines a day. For this reason, Tokyo Metro provides a specific “Integrated Management Center” which is conducting a computer-operated monitoring and operation control system without stopping 24 hour a day.  In the museum, a 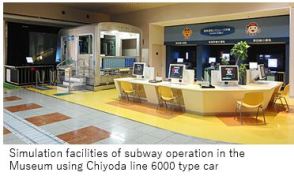 sophisticated simulator device which has been practically used is installed to introduce this control system. Thanks to this, you can understand the contents of actual operation management.
On the other hand, there are countless sample facilities are shown in the exhibition. They are a set of information transmission device for trains, monitoring and failure information system to monitor of malfunction vehicles, and automatic operation control, and other devices. All of them seem to bee the precious exhibits to acknowledge the safety operation of subway management.

♣   Current appearance of Tokyo subway and impression of visit

As mentioned earlier, the Tokyo subway is proud of its achievement of more than 300 kilometers in total running length and supports millions of people in Tokyo every day. The museum is describing a lot about the function and technology of subway

system in Tokyo, such as what kind of technology is used, how the subway system has been developed so far, how the subway has been practically designed and constructed, how the underground excavation has been carried out, and how vehicle development has been done, etc.  However, looking at the current Tokyo subway network, it seems that many issues still remain when seeking further beneficence and development. First of all, Tokyo Metro and Toei

Subway whether coexist as management entities, whether the operation, fare and route management are necessarily integrated, and whether platform and station safety are enough, and others. It could also wonder whether the mutual lines entry and coordination with private railways and JR lines are sufficient, even far advanced compared with previous

time.       At present, the renovation of subway lines is progressing with a rapid pace in light of the 2020 Olympics, which seems to be taking good steps to resolve the issues. I am looking forward to seeing the Tokyo subway several years later. In this sense, this visit to the museum was quite fruitful for me.