The “Olympus’“Zuikodo Technology History Museum” (Hachioji, Tokyo) is a precious industrial museum which exhibits the essence of optical technology of Olympus. It was named “Zuikodo” in honor of its original lens “Zuiko” which was developed in 1920s.

Initially, the Museum was an in-house training facility for the company engineers, but it was reopened later as an industrial museum for the general public in 2013.

♥  What’s it all abut Olympus and “Zuikdo”

The author has visited this ” Zuikodo Museum” for the first time in this Spring. There many historical and current advanced optical instruments were

displayed. Such as historic and high performance super microscopes, and high-end endoscopes, not only Olympus’s propriety cameras. (Note: Olympus Co. currently has nearly 70 percent share of endoscope products i
n the world). Through the visit I was impressed much to the facts that the optical science and technology was deeply permeated in the people’s social life, as well as showing Olympus’s excellent technology.

The following is a brief visit note on the “Olympus Museum” with the historic technology development story of Olympus, as well as the development of Japan’s optical technology as a whole.

(Note) The pictures in the article were posted by the figures acquired in the company’s website and catalog instead of real picture, due to not be allowed the photography in the museum rule.

♣ Founding Story of Olympus and its challenges to the Optical Technology

The “Historical Exhibition Corner ” in the museum shows a development history of the Olympus Co. including its founding process and technology development process.

♥  Historic background of the Olympus

The company was launched in 1919 by Takeshi Yamashita (picture) and began to engage a trading business of the scientific instruments.

At that time, the Company name was the

“Takachiho  Seisakusho”, but name was changed to “Olympus” in the later period. It is said in the description that the name of “Takachiho” was quite resembled to a mountain top “Takachiho-no-Mine” in Kyushu, Japan where, according to Japan’s old myth, the ancient Gods (Kami) was believed to congregate for ritual ceremony, and its belief had led to think of taking after ” Mt. Olympus” in the western Greece myth. Then, the company decided to put the name “Olympus” for the company’s own name in 1949. With the museum guide, with this naming, it is said that they tried to embrace the spirit of producing “world class products” all the time and being globally adopted.

♥  The Olympus which has fostered by the microscope technology

The company’s technology was initially explored by the thermometer gauge and microscope. But the first one was transferred to “Terumo” company later, and “Takachiho” has concentrated into the microscope development. The first product was the “Asahi Go” microscope of 1927 in this

process. This development has given a great opportunity to “Takachiho” in the optic technology and business.
In 1934, the company also started the development of photographic lens by applying the optical technology fostered under a microscope manufacturing. The first product, which was the “Zuiko” lens i
n 1936.  The “Semi-Olympus I” was the first product using this lens. This experience has given a great technology base of Olympus camera businesses and other optical equipment.

During the 1940s wartime, the Company was involved in the manufacturig of optical weapons at the request of the military, but, after the war, it turned the business to the livelihood consumer goods. The Company has become to b

e engaging in the camera business, along with the advancing the microscope technology more than before. In the 1950s, the company was exploring for the first time in the endoscope development as a new business field. Then the Olympus has finally succeeded to product the first innovative Gastro camera (stomach camera). This process can be observable in the exhibition.

♣  Evolution of Microscope ~ A Great Footstep of Optical Technology

Then, let’s take a look at the technology evolution of “Microscope” world in the “Zuikodo” exhibition.

As mentioned above, the company’s first microscope was “Asahi Go” of 1920, but, the improved type of next “Mizuho Go” and “Showa Go” was consequently produced in 1925 and 1927. In addition, The Olympus has produced “Seika Go” microscope. It was awarded of the “Excellent Product Prize”  at the Grand Industrial Expo of Japan in 1928. This microscope was honorably presented to the Showa Emperor, who was well-known person specialized in biology, and it was said to be beloved by him for long time. The ” Seika Go”, which Emperor Showa had used, is now decorated in the exhibition shelf in the museum as a treasury goods. This footing gave the company unwavering position among the microscope and optic makers.

The Museum now displays many microscopes there, such as the “Universal microscope with Super Photo” (1938) which functions not only observing the objects, but creation photo with sharp images along with “Mizuho Go LCE” microscope (1935) which equipped 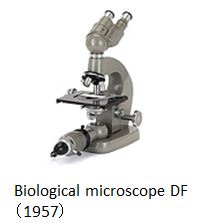 with large binoculars. In addition, after the War, Olympus has begun to produce a new type of biological microscopes, like “Showa Go GK” (1946). And consequently the company made “Biological microscope DF” (1957) and other high precision machines year after year with high magnetic power, which were giving full-scale biological images. 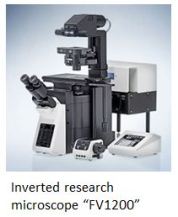 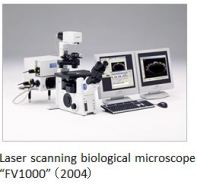 The development of high-sensitivity microscope has made great stride these days too, particularly for the current sophisticated medial fields. Among them, as we can find in the exhibition, the “Inverted biological microscope” (1958), the “Multi-photometry microscope MMSP “(1971) to inspect intracellular materials, and a new type of scanning microscope, the ” Upright LSM biological system for -GB “, and the “Confocal laser scanning biological

♥  Historical review of Olympus cameras and its feature

When in speaking of the Olympus, it might be still on the camera products. The strong “camera corner is provided well in the museum for sure, where the successive Olympus cameras displayed in the chronological order.

As mentioned earlier, the Olympus has embarked on camera production by “ Zuiko ” and its first product was the ” Semi Olympus Type I “(1936).  And, in the 1940, “Olympus Six” has released, and successively the “Olympus Chrome Six IIIA” (1951) was produced too as a small folding camera series in 1940s and 50s. In addition,

Further, the Olympus has put  the “Olympus Flex I type” into the market as a  first twin-lens reflex camera in 1952, and

However, the product which raised reputation most of Olympus name would be the camera of the “Olympus Pen” series. Its primary machine is produced in 1959. This was a small, low-price, high-quality half-size camera. The Pen series have become a long time hit products with more than 17 million unit sales so far.

In addition, Olympus announced the production of a single-lens reflex camera in 1973. It was a lightweight high quality camera named the “ OM” series, and its first issue was “Olympus OM-1.” It was

said that this camera was a world’s smallest lightweight single-lens reflex camera at that time. The “OM”- series was produced until the 1980s with continuous improvement.

♥  Olympus “OM” and “Camedia” camera series got a high reputation

The Olympus has also produced a simplified camera for beginners, such as “Capsule Camera” (1979-85) as a pocket camera. All are used the Zuiko lens which the company has developed with continuous innovation.

In the digital camera area, there is a CAMEDIA series, the primary machine is the “Camedia C-800” which launched in 1996. Digital single-lens reflex cameras appeared in the 2000s in the market too. In this period, many camera makers were competing to make this category of cameras in the market. Among them, the Olympus

launched the “OLYMPUS PEN Lite E-PL1s (2010) “as a latest work in this area. Meantime, Olympus’s first interchangeable lens type digital camera named “E-1” (2003) were released. And “E-330” was added to the digital camera series with live view function in 2006. Currently the Olympus has introduced “E-5” (2010) as a company’s flagship product in the market.

The sales of Olympus cameras have never taken the highest position compared with Nikon, Canon or Sony, but they have been building its own world by taking advantage of specific features with the uniqueness of small and light and high performance of its products. We can see these characteristics in the exhibition..

♣  Endoscope Miracles with the Second Eye of Optical Science

♥  Advancing medial optic engineering by the involvement of endoscope

But the most standout evidence of the technology by Olympus would be the superiority in the endoscopy development area.

The museum has a specific history exhibition corner to show how
Olympus has engaged in the endoscope development and how could get the top reputation in this field. The exhibition gave us a clear story of the excellence of Olympus endoscope technology.

♥  Invention of the first practical endoscope in the world “Gastrocamera”

It was in 1949 that the Olympus began to work on the endoscopic development. The company has succeeded for the first time to develop the practical “Gastro camera GT-IJ” in 1952. This was the results of the cooperation work with the doctors of the University of Tokyo’s Hospital. Previously endoscopes were difficult to bend 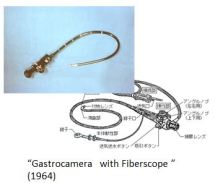 because of using straight metallic tools, but the Olympus’s gastro-scope has broken through this dilemma by adopting a winder pipe for it. Then, in the
1960s, the internal human organs became observable easily by endoscope in real time by using the new material fiberglass which could bend the light ray in the flexible pipe. This first achievement was the “Fiberglass Gastro-Camera” of Olympus in 1964.

This technology made the endoscope to play more active and comprehensive roles in the medical operational field, because it made possible doctors to inspect deep internal organs, not only in the stomach area. Then, 1970, and in the 1980s, the advanced cameras and video technology,

incorporating a video camera used CCD, were added to the endoscope. Then the “Videoscope” endoscope was born. And by this innovation, the medical sites could become materializing the hope of creating the comprehensive treatments and surgery systems which can manage the medical observation, recording, as well as treatment operations at the same time.

Then, in the 2000s, even the world’s first “high-definition endoscopic system” was born. This equipment has advanced the medical systems furthermore by giving highly accurate diagnoses which never miss even a very small lesion. Currently, a capsule 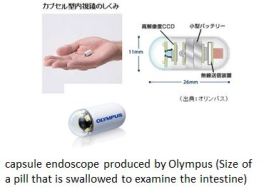 endoscope in diameter 11 mm is also going to be developed which can be swallowed from the mouth. It has revolutionary changed the general concept of the endoscope. It is believed that the Olympus is the top maker to promote these technologies in the advanced level.

We can see fortunately these technology evolutions as well as sophisticated instrument in the Olympus museum.

The “eyesight” is certainly the most important human nerve, but, for long time, people couldn’t see the utmost minute object by our naked eyes. However, by invention of microscope and endoscope, human could obtain the second eye to be able to observe the micron size particles. It would be a great and wonderful footstep in science and technology in this area. Human now can put bright light on the “shadowy object” with expanding the artificial “vision” by physical lenses, microscope, and endoscopes supplemented by photo recording media and video scopes.

The  greatest charm of this “ Olympus Ziko Technology History Museum” would be that we can directly see these  excellent optic technologies and its technology evolution  all together. It must be a valuable industrial museum in the field of optical technology by all means. I’d like to recommend every one to visit who is interest in this  area.